In this study, the effect of STEM education conducted with 73, 6th grade students in a secondary school in Erzurum province in the 2017-2018 academic year on students' perceptions and attitudes towards STEM fields was investigated. In this quantitative study in which experimental method was used, a quasi-experimental design with pretest-posttest control group was used. In addition to the existing program in the experimental group, 6 STEM activities developed by the researchers, and only the current program was followed in the control group, and the same measurement tools were applied to both groups as pretest and posttest. The application was carried out for a period of time. STEM activities have been developed and prepared by researchers. The data were collected using the Perception and Attitude Test for STEM domains. In order to compare the pretest and posttest results of the experimental and control groups, comparison of the pretest and posttest results of the parametric and nonparametric tests in the perception test, the Experimental and Control Group, the related samples t-test; Mann-Whitney U test and Wilcoxon Signed Ranks Test, correlated and unrelated samples t-test from parametric tests were used in the attitude test. According to the findings obtained, it was determined that STEM activities improve students 'perceptions of STEM, but do not affect students' attitudes towards STEM. The engineering design process and computer technologies used in the activities have enabled students to change their perception of STEM. The fact that their attitudes towards STEM fields do not change may be due to the students' attitudes towards these areas at a good level before the study or the measurement tool that measures the attitude did not perform at the level we want. 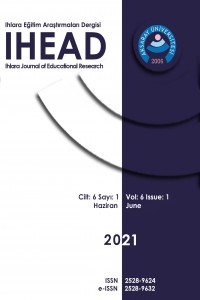